People’s Choice Sausage Company is jerking you around…in all the best ways! 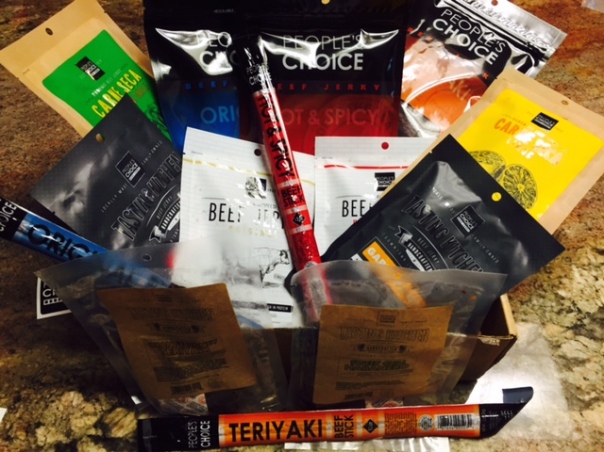 When I was approached by Brian Bianchetti from Los Angeles about trying out some of People’s Sausage Company’s People’s Choice Beef Jerky, I did some digging around on the world wide interwebs and discovered that he was part of a family business that started making meat products back in 1929 in downtown L.A.  Fast forward to 2016-four generations and almost nine decades later, and they still employ the painstaking, handmade processes utilized when their sausage business first started back in the day. Brian’s dad added beef jerky to their product line along the way, and the rest, as they say, is history!

People’s Choice sent me one of everything they offer: Large packs of thin sliced jerky, their three “signature” lines, and their Beef sticks. What do they all have in common? The quality of beef used is excellent. I wasn’t told what exact cut of beef is used for each, but they all had an excellent base flavor and texture, and I knew I was experiencing a higher quality cut of beef than most jerky I’ve eaten (and I’ve eaten a lot of jerky in my day, folks!). Without exception, it’s a great lineup of styles and flavors. I won’t go into significant detail about every one of them, cause I would jerk you one way and then jerk you another, and then you’d start thinking I was a jerk, and well, we wouldn’t want that, now, would we?! But I will touch on all of them and give a little more detail on a few that truly stood out. So let’s talk some jerky! 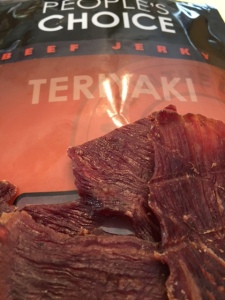 The 3 large packs were simply labeled “People’s Choice Beef Jerky” and  came in Original, Hot & Spicy, and Teriyaki flavors. They had larger sheets of thin sliced beef, and while albeit tougher than the others, they weren’t overly tough. The Original had a good flavor, focusing on the natural flavor of the beef with a nicely rounded, traditionally minded use of garlic, onion, and other spices. It was slightly sweet, but not overly so, and while not highlighted, had less than 300 mg of sodium per serving, something almost unheard of in jerkyland! As someone who tries to watch my sodium intake, I was very impressed. The Hot and Spicy also had less sodium, but I didn’t find it much spicier than the original. It wasn’t quite a sweet on the front end, and there was a little more discernible pepper flavor, but I wouldn’t go so far as to call it “hot”. But then again, I’m a chilehead, a lover of heat and spice, so this flavor configuration probably works well for most palates.  The Teriyaki was understandably sweeter, and with a fairly subtle soy and ginger flavor profile, which I enjoyed because it didn’t overpower the flavor of the beef. It also had slightly more sodium than the other two, which I would have expected. 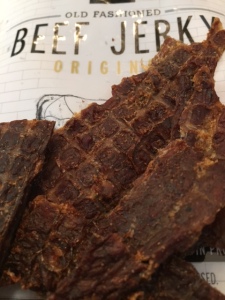 The Old Fashioned line (also in Original, Hot & Spicy, and Teriyaki) was slightly thicker and in smaller pieces, and was dry, but not Sahara desert dry, if you know what I mean. The marketing sheet says this line features old family recipes, and the flavor profiles follow closely with the large, thin sheets found in the large packs. The one exception is that the smaller, thicker pieces were not as sweet on the front end, with the exception of the teriyaki. And the Hot & Spicy brought more spice and heat forward, and after eating an ounce or so, I could tell my mouth was “feeling the burn”(If you’re reading this during the 2016 presidential campaign, well, no pun intended!) The sodium content in this line, while higher than the thin sheets, was significantly lower than beef jerky you find in most stores.

The Carne Seca line also used a thicker cut of meat, but it was still lean. It was mostly dry, but not tough. I tried the Limon and Limon con (with) Chile. 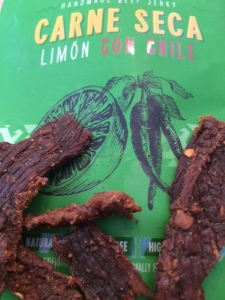 The lime (Limon translates lime-most of the time) flavor was very, very mild and hard to pick up, but there was a slight “brightness” of flavor that I could only attribute to the influence of the citrus. The “with chile” version added a layer of spice that wasn’t overwhelming and played well in the sandbox. The other traditional Mexican flavors were pleasant, the sodium again lower than you’d expect, and while not my favorite in the lineup, I sure wouldn’t turn it down if offered to me.

The Tasting Kitchen line focuses on limited edition, small batch, special flavors, that the company changes every so often. I sampled the Orange Honey Teriyaki, Sweet Chile Habanero, Garlic Ginger, and Sriracha flavors. The first three mentioned featured thick cuts of lean, moist beef, and I felt more like I was eating a nice flank steak, or maybe a round steak that was marinated forever and fully cooked, but not tough at all. The Sriracha, while very lean and flavorful, was much drier than the other three. It was hard to isolate a definitive Sriracha flavor, but after several bites, I felt a nice spice, and if I closed my eyes and concentrated really hard, I could tell that maybe…just maybe, I was eating Sriracha flavored jerky. 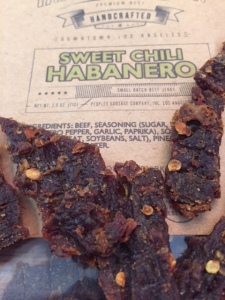 The Sweet Chile Habanero was by far my absolute home run favorite! I wrote notes on every product and I’ll just tell you what I wrote about this one in particular- AWESOME!!!!! Okay, I only used 2 exclamation marks in my notes, but I’m all excited now that I’m sharing my thoughts! It was very moist and tender with a great base beef texture and flavor and a sweet front end. I swear that it almost tasted like it had been candied! Crazy good! The habanero heat layers in very nicely, sliding in behind the sweet, ramping up to a discernible burn, but very manageable for most people. And the heat lingers a bit, just like a habanero should, but the sweetness of the beef and other flavors tempers it to a very enjoyable level. This one is definitely worth multiple repeat performances! And it didn’t have any more calories or significant difference in the amount of sugars, etc. found in the other flavors. The  Orange Honey Teriyaki was very moist, and slightly sticky. I could discern the orange, and I almost found this one a tad too sweet, but my wife and jerky lovin’ son ( And for the record, no, I did NOT call him a jerk,…even though he did try to steal some before I was ready to fully share the wealth!) really liked this flavor. The Garlic Ginger was also excellent, with subtle Asian tones (I mean, duh, it does have ginger in it) and a well balanced flavor profile.

And the big surprise for me were the Beef Sticks, also in Original, Hot & Spicy, and Teriyaki flavors. I’m generally not a fan of beef sticks because I find them greasy, either too tough or too mushy, and with an artificial tasting flavor. Not this time! They were lean, not greasy or oily at all, and tasted fresh and natural. They had a nice firm casing that was not tough at all, and the meat was just the right texture and consistency. While the Original and Teriyaki mimicked their thinner cousins very closely in their flavor profiles, I found the Hot & Spicy beef stick to be spicier than its cousin, with a nice, layered heat, which I thoroughly enjoyed! I can’t think of a company making similar products that could shake a stick at them! Get it? Stick at them? Beef stick!? Sorry…couldn’t resist.  Anyway, I loved them!

So, there you have it, peeps! A great lineup of beef jerky that boasts something for everyone! From traditional to sophisticated and unique, People’s Choice Beef Jerky lived up to their claim of making things that are made with purpose. It’s very difficult to really get a sense for someone’s emotion in an email, much less their passion, but it was easy for me to tell that this family run business in downtown Los Angeles is proud of their products, their roots, their family, and the handcrafted traditions used in crafting some really smart beef jerky. And well they should be! If I have to wrap the company up in one rating, I’d have to give People’s Choice Beef Jerky and all their collective goodness 4.5/5.0 Fiery Worlds!!! And I promise, I’m not jerking you around! I know! I know! But I just couldn’t resist. Go visit their website at www.peopleschoicebeefjerky.com and tell them that “It’s a Fiery World” sent you! Because we all know, Ladies and Gentlemen, that it truly is a Fiery World! 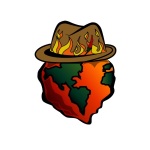