Gringo Bandito Hot Sauce is out to Change the World and Burn it Up! 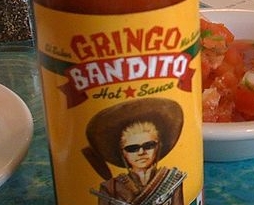 When you first pick up a bottle of Gringo Bandito Hot Sauce, you see a fun image of a sombrero and sunglass wearing, very white (thus the Gringo part of the name, I assume), blonde, pistol packing, bandolier draped character carefully guarding the contents. What you may not know is that is the image of Gringo Bandito founder Dexter Holland, front man for the punk rock group The Offspring! What you may also not know is that Dexter developed and founded his sauce company in 2004 because it would “be cool” to have a hot sauce, and because people who are into hot sauce are passionate! Before taking the first taste, I already like this guy!  Luckily, I also liked his sauces!

There are three main sauces in the Gringo Bandito lineup- the original red sauce that features habaneros, jalapenos, and red Japanese chile peppers (more on this later),  and two offspring sauces – a green sauce with habs, serranos and “more” peppers,   and a Super Hot sauce with scorpion and jolokia (ghost) peppers. According to their website, there are limited release private reserve sauces that appear annually and a taco seasoning coming out in 2017. The original red sauce is a nice, smooth blend of the habs, jalapenos and the darker, earthier, “chile arbolish” Japanese chile, which is actually a native of Mexico’s Jalisco region. The Japanese Chile is a well known player in Asian dishes, especially Szechuan! How’s that for cultural diversity! With a nice front end playful heat, the red sauce makes very good use of black pepper and spices to enhance the earthiness and complexity of this signature sauce. I’d say it has a  low to medium heat and does justice to eggs, pizza, tacos, fish, chicken, black beans, and I’m sure lots and lots of other things. Given the complexity of flavors, it’s almost like Dexter used the recipe for some sort of doctoral research in Molecular Biology!

Next up is the green sauce, which pairs a mid palate pop of habanero pepper with the bright, citrusy front end annum style heat of the Serrano’s, and, according to the label, adds in the mysterious “more” peppers. What peppers are those? I really couldn’t discern any specific type, so we’ll just let more be less. And while this sauce has a light green appearance that isn’t the most appealing to me, it takes off on a mojo-induced, solo green sauce flight around the world, landing right in the center of my flavor runway! I loved this sauce!!! So much I could see myself getting on a private jet, flying to the Isle of Man, skydive down, and telling the first person I see that I give Gringo Bandito’s Green Sauce my Fiery World stamp of approval!!!!!

The last entry in this Rock trio of sauces is the “ridiculously rambunctious” (straight from the label) Super Hot! Made with Scorpion and Jolokia, or Ghost, peppers, each known for big hits of heat and flavor, I have to say I was genuinely surprised, as I was fully expecting some super charged, tubular, “nitro” induced blast of heat! However, the Super Hot came across my tongue in a wave of balanced flavor, heat, and spice! It was almost like I had just experienced the Housewives of Orange County- richly flavored, plenty spicy and wildly playful, but still grounded in suburbia!

All in all, of the two traditionally styled hot sauces, I have to give the valedictorian award to the original red sauce! I liked them both, but I especially liked the way Dexter used the blend of the earthy Japanese chile with the habanero, jalapeno, black pepper, and other spices. Don’t get me wrong-the Super Hot was also very good, and it had plenty of good heat that made you pay close attention to the ride. I compare it like this-You’re expecting that knock you off your surfboard big wave of heat, and instead it gives a fun, tricked out skateboard ride through the streets of Orange County! But the green sauce, pukey color aside, was a solid home run for me! I really, really liked it and I’m super picky when it comes to green, verde style sauces.

And I’d be remiss if I didn’t talk a little about labeling, since that’s what draws people to a product on a store shelf. According to some random internet sources, Dexter’s choice of label art was a way to pay a bit of homage to a staple of the Mexican sauce world, Tapatio, which displays a similar image, albeit not the very blonde, Dutch looking white guy with punked blonde hair! Gringo Bandito sports a smart, clean, visually appealing label, each flavor with it’s own label color, making it easy to spot on a store shelf. And the witty banter they placed in the contents and nutrition info certainly brought a smile and soft chuckle to this fiery food aficionado. Now found nationwide in several thousand grocery stores, and online at www.gringobandito.com, Dexter Holland’s labor of passion and love is doing quite well for itself.

The Gringo Bandito trio of sauces adorning my egg white omelet! So so good!

So there you have it! A punk rock inspired, three piece band of sauces – each instrument with a unique sound – kind of like a Gibson and an Ibanez, but when connected with a Marshall stack, they come together as a finely tuned symphony of flavor, spice, and heat. El Sabor Gringo Bandito is highly recommended by this blogger and reviewer , and I’m sure it will bring a smile to any hot sauce loving family of Offspring! And never, ever forget, ladies and gentlemen –  It’s a Fiery World!