As I sit on my flight to Baltimore, I just deleted an hour’s worth of blogging! Don’t you hate when that happens? I wrote a nice preview of my weekend journey to Peppers on the Beach (POTB) and POOF, it just disappeared!! Arrrrrgh!!!! So let’s try this again.

I was talking about how POTB is a hot sauce and spicy food show sponsored by Peppers, one of the largest East Coast spicy food stores, and located in Rehoboth Beach, Delaware. In it’s third year, the show is the brainchild of John and Maggie Dilley of Defcon Sauces. Now boasting a major co-sponsor, Mountainaire Chicken, the weekend long event will boast a virtual mountain of chicken wings being cooked, judged for competition, and served up in a variety of styles. Judges will be chosen from the audience, which gives a nice “people’s choice” bent to the competition. Over 33 spicy food companies will be in attendance, serving up cooking demos and samples of their best products, and over a dozen restaurants from around the region showing off their specialties and pleasing the crowd with culinary delights.

Chip Hearn, Pepper’s owner and host for the weekend, opens his store for the throngs of spicy food lovers, and some of the industry’s premier bloggers. Brian and Marilyn Meagher, known for their well respected blogs, Hot Sauce Daily and Weekly, will be hosting bloggers roundtable and podcast from the show. Other big name bloggers are Scott Roberts of ScottRobertsWeb fame, home of the most frequently referenced Scoville sauce and pepper scale on the Internet, and Al “Buddah” Goldenberg, editor in chief of I Love It Spicy and undeniably one of the biggest ambassadors for the spicy food industry. Other bloggers will be there, including video review blogger Firehead Tom Gatley and yours truly. And last but not least, the crew from the Internet’s most raucous spicy food channel, Eat More Heat, will be broadcasting live all weekend. James Wreck and John Scrovak are sure to entertain and inform all those who want to live vicariously at POTB for the weekend!!

The weekend will include Johnny McLaughlin’s famous Chilehead Rockaria Karaoke contest and an attempt to beat three (count em- Three!!!) Guiness World Records in pepper eating as Steve “The Machine” Smallwood brings his iron clad stomach to POTB for the occasion! I swear the man has no pain receptors in his mouth, throat, or anywhere else!

And as I mentioned in the title, the weekend includes a prayer. Maggie Dilley had emergency surgery the day before the show (Thursday, the 17th), and will be recovering in the hospital for the weekend! That means the folks whose inspiration started the whole thing won’t be there. So I lift Maggie up with prayers for a speedy recovery! You guys will be missed.

Well, the captain has issued the “fasten your seat belts, it’s time to land” warning, so I’ll sign off. Stay tuned for more this weekend as I experience a weekend of spicy food, hot sauce, good friends, fun times, and wings wings wings!! And always remember, ladies and gentlemen, It’s a Fiery World!!!! 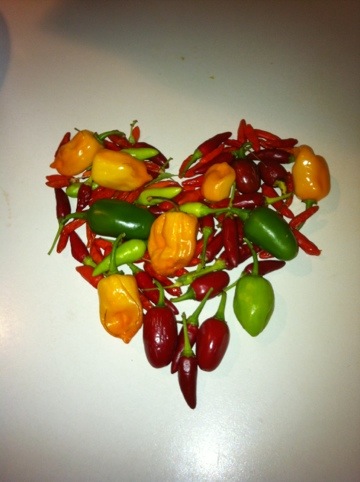