When I tell you that Steve and Lisa Seabury’s High River Sauces is heatin’ up the New York skyline, I’m not kidding! Their newest creation, Foo Foo Mama Choo, is made from the latest pepper to be recognized as the hottest on the planet by Guinness World Records- Smokin’ Ed’s Carolina Reaper! The “Reaper” clocks in at an average of more than 1.5 Million (yes, Million with a capital M!) Scovilles!  So it takes a lot to make a sauce that celebrates the sweetness of the Carolina Reaper while acknowledging the “Kung Foo Foo Fighting” nature of it’s heat!  And that’s exactly what Foo Foo Mama Choo does!

For those not familiar with High River Sauces, the sauce company was born a few short years ago with the release of Hellacious, a great sauce with a rich flavor that travelled the heavy metal circuit with Steve.  After adding the likes of Tears of the Sun, Rogue, and Grapes of Wrath, this latest offering does not disappoint.

I absolutely love Foo Foo Mama Choo’s label!  Just like the sauce, it’s simple and complex, from the name to the logo of the fired up dragon out to save the princess! I know..I know!! Dragon?  Fire? Princess? What’s up with that? I’ll tell you in a second….But back to the label- great graphics, easy to identify on a shelf, and fun! High River has won awards for their label graphics and marketing, and with good reason! The label makes a great marquis for the concert of flavor inside.

Foo Foo Mama Choo is a complex sauce. But it comes off simple. The label says it’s a little Asian, a little Southern Country, but I say it’s a lot unique. The natural blending of new flavors with favorite ingredients creates a veritable concert of smooth flavor.  Kinda like when  Jimmy Page and John Paul Jones played with the Foo Fighters in 2008 at Wembley (get it? Foo Fighters? Foo Foo Mama Choo?! Ok, fine….never mind..). Complex notes of “secret spices”, ginger, reaper pepper, roasted red peppers, and soy sauce, along with the more simple harmony of roasted tomato, onion and garlic come together nicely thanks to the backup band of rice wine vinegar, brown sugar, and white pepper. And did I mention it’s HOT!? The Carolina Reaper, with it’s world record heat, packs a big punch. But it is a sweet pepper, with a great citrusy note, and High River has managed to layer it, control it, and deliver it with the finesse of a fine sound board engineer! Yessir, ladies and gentlemen, just like the music legends I mentioned, Foo Foo Mama Choo masters its sound and harnesses the raw energy of the world’s hottest pepper in unique and memorable fashion. 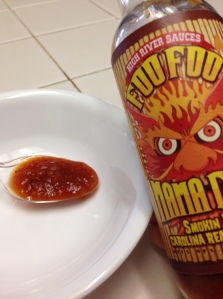 So, to sum it all up, Foo Foo Mama Choo comes in with a 5 Fiery World rating! My highest, and rarest, score!  It’s really that good, folks. This is a sauce that creates a fire breathing, high flying dragon that rises up, brings serious heat, and saves the Princess from the evil Witch! I know…I told you earlier that I’d explain. Steve and Lisa’s daughter created the inspiration for the sauce when she tried to cast a spell to turn Steve into a dragon to save the princess from the evil Witch. But, instead of Bippity Boppity Boo, she came out with Foo Foo Mama Choo – and history was made!

Foo Foo Mama Choo makes it public debut on February 28, 2014. Do yourself a favor, and go to High River Sauce’s website and order some. It can also be found at iBurn.com and at Peppers.com. Order more than one- trust me on this one!  Why, you ask?! Because, Ladies and Gentlemen, It’s a Fiery World!

Ken Alexander is a self-proclaimed Chilehead, with a love of spicy food, hot sauce, and the zest of life. Ken lives in Baton Rouge, LA, in the heart of Cajun Food country, and enjoys experiencing new tastes and flavors from all over the world. In addition to managing It's a Fiery World, "Ken's Fiery World" is a regular podcast segment on Scott Roberts' Weekly Firecast, where they discuss all things hot, spicy, and tasty! Ken is also a staff reviewer for the video based review site ILoveitSpicy.com and has been a contributor to the Premier spicy food blog HotSauceDaily.com. Ken also likes humming TV theme songs, playing Yahtzee, and quoting old Kris Kristofferson lyrics. But above it all, Ken love to celebrate our collective "Fiery World"!!
View all posts by Ken Alexander »